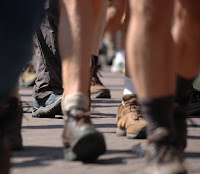 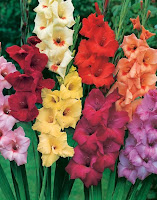 The Vierdaagse is always drawing a crowd of one
million visitors. Especially on fridays many hundreds
of thousands of people line the last few kilometers of
road before the finish to cheer on the walkers. That
street, the St. Annastraat, is named "Via Gladiola" for
the day, as the gladiola is the official flower of the
marches, and it is tradition to give them to the
participants. As far as a week ahead people will
reserve spaces alongside the Via Gladiola by placing
chairs and even couches.

For the third time these marches we met dutch tv
celebrity Harm Edens and since he had promised
to carry the walkers on hands (a dutch expression)
my sister asked him to do so on the first and the
second day but he declined. He could not of course
decline her the last day and he carried my sister for
a bit of the walk !

Our arrival at the Via Gladiola turned from lovely
weather (see top photo) to lots of rain and thunder,
again (see lower photo). Our shoes filled up with water,
but since we were very glad that we were on the Via
Gladiola it did not bother us too much. We all made it
and we are looking forward to next year. First time
walker Linda (http://dametje20.hyves.nl/) also made
it, so we are very proud of her.

You have done fantastic to walk on all 4 days! Its been lovely following your story. Thanks for sharing. Hope you are not feeling too sore over the weekend. Your sister was very lucky to get a lift! Hope your Dad managed ok.

You have a lovely blog & your creations are always fantastic. I look forward to visiting again soon.

You have some lovely books in your side bar I am currently looking for 2 for them over here!! Thanks for the great links.