What do you do if you need a candleholder
but instead have a bunch of Gnomes and
empty jars ? Exactly, you make your own
candleholders. All you need is a big glass
jar, insert your Gnomes, and top it off with
a tealight holder. It looks even better if you
make a few that can stand in a row. 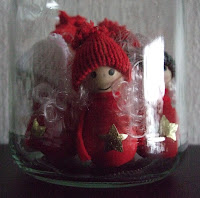 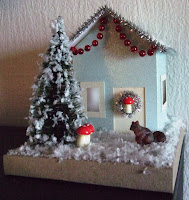 This is my first Glitter House. I made it from
glitter cardboard so that it sparkles really pretty
when for example the lights from the Christmas
Tree shine on it. 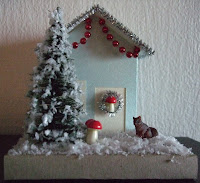 First i made a cardboard model that i used to trace
around because i did not want to waste any of the
pretty cardboard. 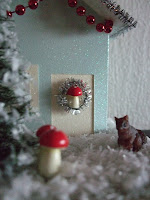 Other materials i used are fake snow, some
decoration chain, pipecleaners, a bottle brush
tree, some cardboard and brown paper, mini
toadstools, some plastic for the windows and
a plastic squirrel. And glue ofcourse. 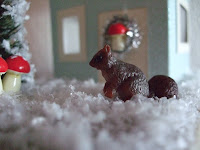 A Christmas village, (or putz), is a decorative,
miniature-scale village often set up during the
Christmas season. These villages are rooted in
the elaborate Christmas traditions of the
Pennsylvania Dutch. Mass-produced cardboard
Christmas villages became popular in the US
during the early and mid-20th century.

In early-colonial American Moravian homes,
the construction of a putz, at the base of a
Christmas Tree was a very common holiday
activity. The term was derived from the German
verb putzen (Dutch = (op)poetsen), which means
"to clean" or "to decorate." These nativity scenes
soon became very elaborate.

Although initially placed beneath the Christmas tree,
by the early 1800s a family's "putz" might have also
been found on the fireplace mantel, side tables, and
other prominent places within the home. These
expanded scenes might include other stories from
the Bible. By the mid-19th century, more secular
figures and scene elements were being added to the
putz. In many homes, the putz took more time and
energy than the decoration of the family Christmas
tree. Eventually, toy trains were added to these
miniature worlds.
Gepost door Meikoningin 6 opmerkingen: 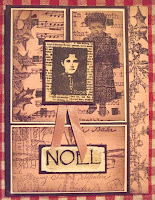 I received this gorgeous Christmas Card from Corien.
The colours are very pretty but they do not show as
pretty as they are on this photograph. 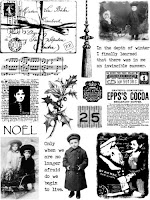 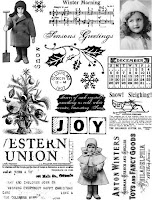 The stamps used are those of Oxford Impressions, the
sheet Season of Giving. Oxford Impressions also has
another Christmas sheet called Winter Snow and both
are fantastic and i have them both because it is one of
my favourite Stamp Companies.
Gepost door Meikoningin Geen opmerkingen:

I made gnomes. Christmas gnomes. Lots of them.
and they became so sweet i just had to take a
picture of all of them together.

There are twelve big, and twelve smaller gnomes.
I used the materials from the Christmas kits from
Nille and added some of my own materials. 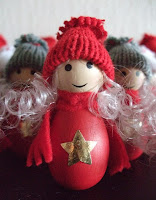 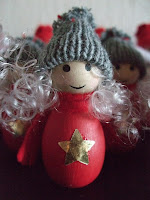 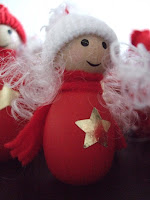 I feel they have become very sweet with their curly hair and
small knitted hats.
Gepost door Meikoningin Geen opmerkingen: 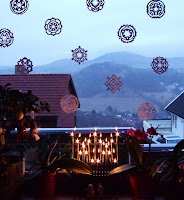 This year i have been clipping snowflakes. It is very
addictive and fun. And they look so nice on the window.
And they look much more difficult to make than they
really are. Here are some pictures to help you on your
way when you want to try it yourself :

My family is being very crafty again this Christmas.

My mother made a beatuiful A3 drawing of this building
which they look at from their front windows and made it
smaller on the computer to use on this year's christmas
cards.

My sister has made this sweet card with glass paint,
very nice with real christmassy colours. It looks really
gorgeous standing in front of the window. 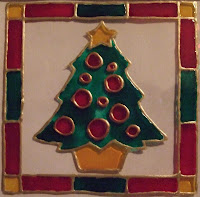 And last but not least my aunt. She made a pretty aquarel
painting of a christmas rose and had smaller copies made
to use on their christmas cards. The colours are nicer
on the original, i did not manage to show them in
this photograph.
Gepost door Meikoningin Geen opmerkingen: 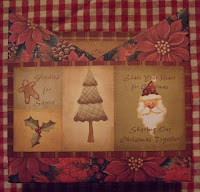 Instead of hanging the christmas cards in the window
or on the wall, i decided to make a Christmas Mailbox.
It is not only handy because you can take a look at the
cards and inside of them, but is is also very decorative
to place in you room. 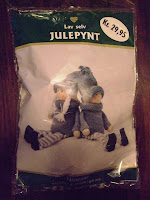 I promise this is the last one of these kits i will buy.
This year that is. These guys are just too sweet not
to buy and make. We will need a bigger house to put
them all on display when they are done !
Gepost door Meikoningin Geen opmerkingen: 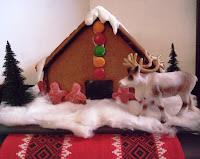 My first ever Gingerbread House ! Decorated with
sugar snow and colourful sweets. 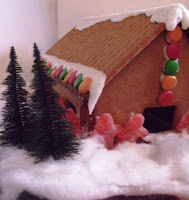 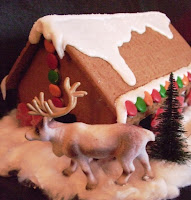 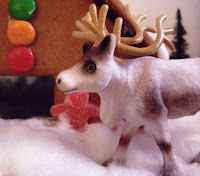 More altered Sylvanian fun. Jenifer made this Christmas
Rabbit, how sweet is he ! For more of the stuff she made
check out her hyves page in the list to the left.
Gepost door Meikoningin Geen opmerkingen:

For the time being the last of the shrines. I am thinking
about making more though, as it is really fun and addictive.
And there are lots of possibillities : ATC shrines,
In This House shrines ... i am getting itchy already. 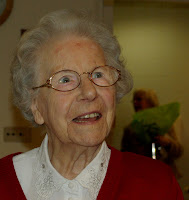 This is my Gran, it is her birthday today !
She is 97 now, congratulations Granny !
Gepost door Meikoningin 1 opmerking: 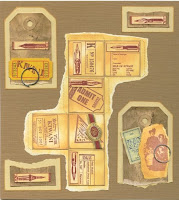 This Box Collage i made with a set stamps by
Limited Edition Rubberstamps. It is the Kiwani
stamp set which i like very much. This collage
could be folded into a box.
Gepost door Meikoningin Geen opmerkingen:

Today is Santa Lucia Day and my Lucias will
be going outside to go in a procession and sing
songs at peoples doors, as is costumary.

These Lucias are actually Christmas Gnomes
that have gotten a makeover.
Gepost door Meikoningin Geen opmerkingen:

A frugal cone this time : made from an old book,
some crepe paper, some string, glitterglue and
glue.
Gepost door Meikoningin Geen opmerkingen: 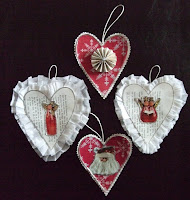 Now for some heart decorations. For all
of these decorations you need : an old book,
some illustrations from Christmas folders,
crepe paper, some coloured paper, glitterglue,
some string and glue. 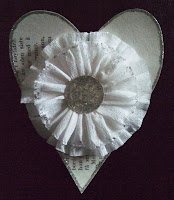 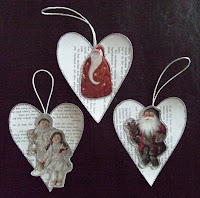 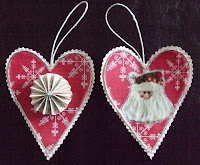