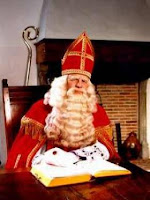 The Sinterklaas feast celebrates the birthday of Saint Nicholas,
patron saint of children. Saint Nicholas was a bishop of Myra in
Turkey. Sinterklaas has a long white cape, wears a white bishop's
dress and white mitre (bishop's hat), and holds a golden staff with
a curled top. He carries a big book that tells whether each
individual child has been good or naughty in the past year.

He traditionally rides a white horse. In the Netherlands this horse
goes by the name Amerigo. In Flanders, up to the mid-20th
century, Sinterklaas was depicted using a black mule, rather
than a horse.

"Zwarte Piet," Sinterklaas' helping hand Black Pete, has his
origin in the bishop's legendary past. Three small Moorish
boys were sentenced to death for a crime they did not commit.
The bishop intervened and they were saved. To show their
gratitude, the boys stayed with Sinterklaas to help him,
tumbling and jumping on rooftops on Sinterklaas night to
deliver presents.

Their black skin may refer either to their Moorish background,
or to the job of chimneysweep, an option that is corroborated by
their clothes, reminiscent of an Italian chimneysweep's costume
and Pete's rooftop occupation.

Sinterklaas and his Black Petes usually carry a bag, which
contains candy for nice children and a "roe," a bunch of willow
branches used to spank naughty children — in actuality a
chimneysweep's broom. Some of the older Sinterklaas songs
mention naughty children being put in the bag and being taken
back to Spain.

The Zwarte Pieten toss candy around, a tradition supposedly
originating in Sint Nicolaas' story of saving three young girls
from prostitution by tossing golden coins through
their window at night to pay their father's debts.