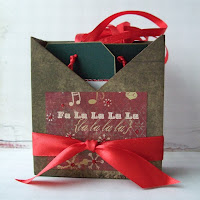 Made from raisin packaging : 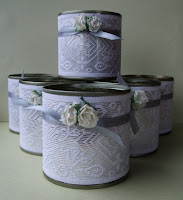 I repurposed tin cans (which used to hold mushrooms)
to use as candlesticks for vintage looking tealights. 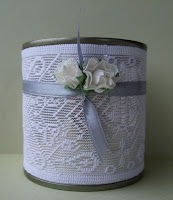 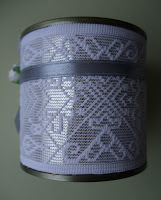 Okay, you made a nice card and put it in an envelope
and make it ready to be sent to someone. You can then
make the choice of only putting a regular stamp on the
envelope OR you can choose to also glue on a stamp
of your own, which makes the envelope all the more
special. And such a stamp of your own is called
Faux Postage. I will show you some of the ones i made.
The first three sets are made with stamps.
The sheet on the bottom is made on the computer. Two ATC's that i made earlier. They are quite
different from what i normally make. They
are simple yet powerfull, well atleast i think so.
Usually i put way more on the 2,5x3,5 inch canvas
but sometimes it is good to try something else.
Gepost door Meikoningin Geen opmerkingen:

How i like to make Deco's from cardboard children's books.
It is fun to do and is a bit like an Altered Book, but different
in many ways. For one, Deco's are usually much smaller in
size than Altered Books. Here is one i made with stamps
by Acey Deucy, one of my all time favorite stamp lines.
The Deco is made from a small cardboard book, about
10 cm x 10 cm in size.

What to do with an old chinese paper ? Add some paper
scraps, stamps and a glassine envelope and make a card ! 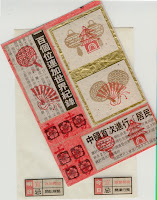 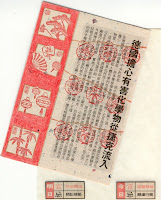 An ongoing project of mine is to make an afghan out of
Granny-Squares. I have about 60 squares at the moment,
still lots of work to do ! 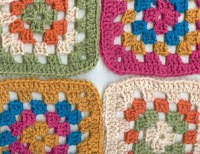 I am crocheting with pure wool, needle 4.5, to make
sure that the colours will not fade over time. Plus to make
sure it is really warm and cosy when i sit under it on the sofa :) 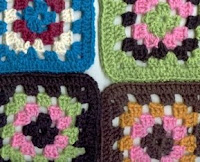 These socks were knitted by my Gran,
about 35 years ago, a pair for me and my
sister. Later, when we were too big to
fit them we used them to dress our Big Doll
and my Teddy Bear i have had since birth.
The pattern is very common for knee-high
socks in The Netherlands and is called
Coffeebean, because of the small oval shapes
that the pattern makes.
Gepost door Meikoningin Geen opmerkingen: 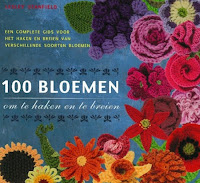 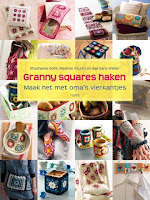 I recieved some new craft books as gifts. They
are all knitting and crochet books, so that means
a lot of fun ! Check back later to read reviews of
these books.
Gepost door Meikoningin Geen opmerkingen:

Be frugal, be resourceful !

We get tons of these in the mailbox and in the
weeks before Christmas, most of them contain
small treasures. Look at the lower left corner ...
and you find pictures like the ones below here.

I am sure that you. like me, see the potential
of these. The first thing i thought was gifttags !
Not all crafts need to be expensive :)
Gepost door Meikoningin Geen opmerkingen: 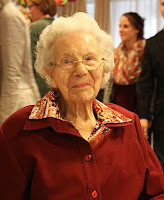 The birtday girl, on the right photograph with my
father and the arm of my mother ;) 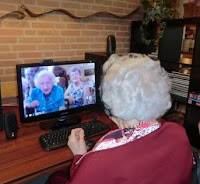 Webcamming with her 97-year old sister who lives
on the other side of the globe, in Australia. 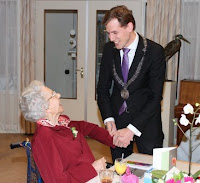 Congratulations from the vice-mayor who was wearing
his real chain because he had an official errand after his
visit, how cool ! 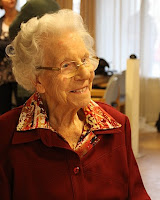 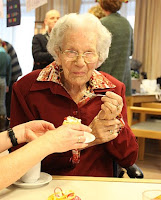 Enjoying a glass of advokaat, a sort of thick eggnog
made with brandy. On top of the advokaat it is
customary to have a nice dash of whipped cream,
nom nom !

When we were in Copenhagen i noticed that there are
a lot of beautiful and interesting buildings to be seen.
Here are two buildings that especially caught my eye :
the theater and the train station. 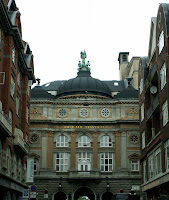 There is also a restaurant in the basement of the
theatre, which is called : The Theatre Basement.

The old costume and props room is now used for meetings
and courses and one of the days of our seminar was held
in there. 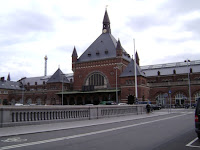