Yesterday we were going on a surprise trip with a group
of colleagues. The trip itself was no surprise, but the
destination was unknown, so we were very excited.
We were picked up with a bus and driven to Stavanger.
There we were picked up by a speed-ferry for a great
trip, it is such fun to see the world from another
perspective.
We were about three quarters of an hour underway
when all of a sudden the ferry radically changed it's
course. The captain had recieved an SOS sent by the
ferry Foldøy and we had to come to the rescue !
The Foldøy had missed motorpower and had drifted
towards one of the many islands and run aground.
It had been lieing stranded for over an hour.
The passenders had been stuck on the ferry and were
to be taken aboard our ferry. This meant tieing the
ferries together which sounds easier than it was. It
took quite a few attempts but then we were finally
secure and could start to take on the strandees.
Most of them were really cold by now and were happy
to come onboard.

After we "saved" the passengers, the ferry had to be
pulled loose. In the mean time, another, even smaller
ferry than ours, had arrived to assist. The pulling loose
was no easy task and took quite a while, after which
the two ferries had to push the Foldøy to the nearest
pier. By the time the Foldøy had come loose there
had arrived a pilot vessel to steer the ferry as much
as possible.

All in all it took about two and a half hours to get the Foldøy
safely to the pier and we could reembark on our own voyage.
We were delivered to the restaurant Sjernarøy Maritim,
where we heartily enjoyed dinner, as we arrived long past
the normal dinnertime. All in all an exciting day ! 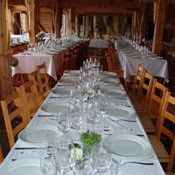