What we eat on Queensday and next year on Kingsday

There is one thing that we always eat on Queensday : Oranje Tompouche
(Orange Mille-feuille / Oransje Napoleonskake). 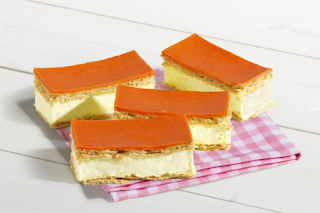 The mille-feuille (from the French : "thousand leaves"), vanilla slice,
custard slice, also known as the Napoleon, is a pastry of French origin.
Traditionally, a mille-feuille is made up of three layers of puff pastry,
alternating with two layers of pastry cream. The top pastry layer is
glazed with pink icing. On Queensday the glazing is orange.
In Denmark and Norway, it is simply called Napoleonskake.
In Belgium and the Netherlands the tompouce (or tompoes) is the
equivalent pastry. Several variations exist in Belgium, but in the
Netherlands it has achieved an almost iconic status and the market
allows preciously little variation in form, size, ingredients and colour.
The cartoon character Tom Poes by Marten Toonder is named after it.
This year we also had orange soesjes (small cream puffs / små vannbakkels)
and saucijzenbroodjes (sausage rolls / pølsehorn), nom nom ! 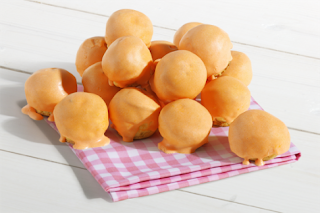 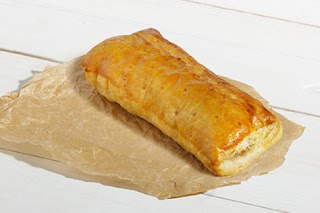 This is a very interesting post, I like to learn about culture and customs. So, this will be Kingsday in 2014 and the orange is to note the country's traditional color? I love it. Those photos look delicious!

If you would have the opportunity to visit The Netherlands one time, you will be able to taste these delicious treats :D Orange is our national color, and is as important as the colors of the flag. It comes from the extensive name of our Royals, who are called from Orange Nassau :) And yesm Kingsday in 2014, have to get used to that one !