Today we visited the town and port of Stavanger. It is
always fun to go there because of the ships, the lovely
architecture and the beautiful church.

We went shopping, attended an international market
with foods from all over europe and ... we rescued Søren. 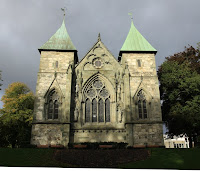 We found Søren sitting in the middle of a sidewalk, looking
really bad and to be honest, we all thought that he was
going to die soon. But we could not let him sit there,
someone might step on him. So we picked him up (the
evidence that he really was not okay at all) and put him
into a brown paper bag with some tissuepaper in the bottom.
We wanted to take him with us so that we atleast could bury
him in the garden instead of lying dead on the cold sidewalk.
The first hour or so he was sitting quietly in the bag but
then we noticed he was beginning to move more and more.
We checked inside the bag and to our surprise he was
looking up at us and he was surely wondering why he was
stuck in a brown paper bag. 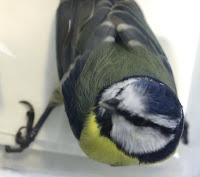 After we came home we put him into a translucent plastic
container to check if he was looking better than when we
found him, and that he did. It was obvious that he was
feeling much better and that he would be best off outside
in the garden with the other birds, so we set him free.
He flew off, chirping loudly and looking as healthy as a
fish, which in itself is a bit weird for a bird of course.