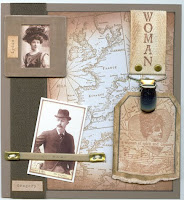 Twenty year-old Lydia was truely a woman of spirit and
capacity. She was a nurse and had been an employee of the
army for two years when she met Gregory. At 27, Gregory
was the youngest Major ever. He did not agree with the
reasons behind the war they were now fighting in. He had
always believed in humanity but was now extremely
disappointed by what he had witnessed in the recent years.
When Gregory was injured, trying to save the newest member
of his platoon, he was delivered into the care of Lydia.
Lydia hated war. She hated the army too, but she had to take
any work that she could get because the world was now
enveloped in a crisis and the army payed well. Gregory had
to stay in the hospital for quite a while and he and Lydia spent
many an hour enjoying eachother's company and the
conversations about any and every topic that came up in their
heads. By the time Gregory's wounds had healed, the war was
over and both Lydia and Gregory travelled home, to their
families. But not before they exchanged adresses and
immediately the letters began to travel between them. After
a year of writing Gregory asked Lydia to become his wife, and
she happily said "Yes". Alas, i can not tell you that they lived
happily ever after because just days after they celebrated their
wedding, Lydia and Gregory died in an accident whilst travelling
on the night train. As they were asleep when the accident
happened they did not feel pain or fear, and atleast they are
now together in death, for all eternity.

I was so happy to see that you participated in this challenge. This is really a great card, I like all the elements in it.

Oh, what an engrossing story! You have such an imagination and while I am sorry that they were not able to live happily ever after, they did enjoy love with one another and yes, they are together with one another in eternity.

My goodness, I wish you lived near me - we would have such chats over pots and pots of tea (or glasses of iced tea)!

What a great scrap book page and what a sad story!
Happy Crafting
Gini
xx